With all the craze going on for cryptocurrency mining, most of the graphics card prices have skyrocketed so high that it’s impossible for budget gamers to afford even an entry-level card. And the prices are just going to keep rising every month.

It’s not really good news for gamers out there and we can’t even begin to imagine how much more expensive will the next-gen cards be from AMD and NVIDIA. While gamers protest against the sudden rise of GPU prices due to its demand, it’s quite a coincidence that AMD had recently launched their latest Raven Bridge APUs with ZEN cores fused with some few number of Vega GPU cores. Can the latest AMD Ryzen 5 2400G APU keep up with today’s games? When I heard the announcement of the new AMD Raven Bridge APUs, I wasn’t really keen on the performance of these chips. That’s probably because most of us are now too used to high-end products and specifications, eh? That said, after trying out the new APUs, I think it’s not that half bad to play on lower settings and resolutions (if you only just want to enjoy the game and not nitpick on all the framerate drops and reduced graphics quality). I’m talking about the good old 720p PC gaming.

Before we go ahead talking about the numerical performance results, let’s take a peek at what’s inside this little chip. For starters, it’s a quad-core Ryzen processor with eight full-blown computing threads, 2MB of L2 cache and 4MB of L3 cache. We are looking at a chip that works at a base clock speed of 3.6 GHz per core, and shoot all the way up to 3.9 GHz for its maximum boost potential. While this looks quite similar to the earlier Ryzen quad-core chips that were released last year, the main attraction here is the integrated GPU that consist of 11 Radeon Vega compute units. Yes, it’s just a very small percentage of compute unit as compared to the mighty AMD Radeon Vega 64. That said, the integrated Vega GPU of the Ryzen 5 2400G is clocked at 1250 MHz speeds. Since this APU doesn’t feature its own memory, the chip depends on shared system memory, and which in this case, is called UMA (Unified Memory Architecture). This can be set up from the motherboard BIOS and we could set the maximum graphics memory as 2GB. While this seems quite low, the games we tested did perform quite decently. Keep in mind that there were several reports from different publishers, stating that there will be BIOS updates in future that allows for UMA settings up to 8GB.

There is no doubt that the AMD Ryzen 5 2400G APU features the most powerful integrated graphics solution available in the PC market (Up until when Intel releases its new processors with Vega graphics and HBM2). The products that we used for testing were given by AMD themselves, which includes the AMD Ryzen 5 2400G APU, the Gigabyte AB350N-Gaming WiFi mini-ITX motherboard and a pair of 8GB G.Skill Flare X DDR4 (Certified for Ryzen compatibility). We set the speeds of the DDR4 RAM at 3200MHz (XMP Profile). After all, since all Ryzen processors do benefit a lot from the speeds of RAM chips, it’s obvious that the ZEN cores and Vega GPU is interconnected with the Infinity Fabric technology. The higher the RAM speed, the better will the Infinity Fabric get in terms of performance. Now keep in mind that the controller will work at half the clock speeds of the RAM that you have set. 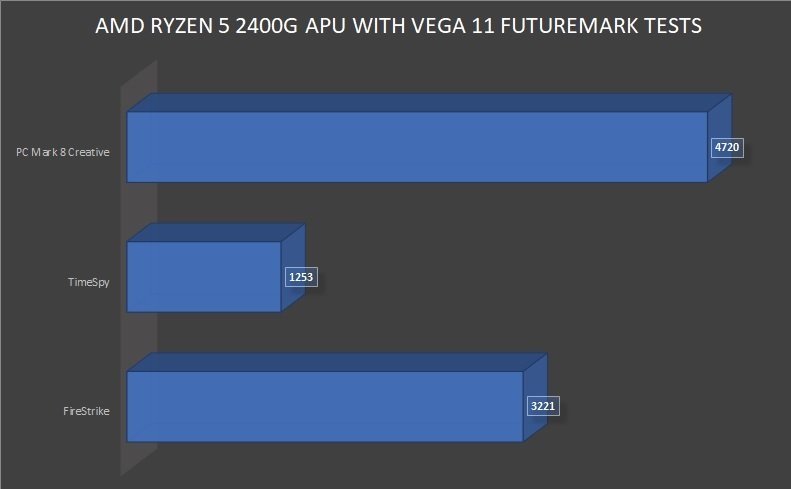 We ran a series of synthetic benchmarks like the PC Mark 8, FireStrike and TimeSpy from Futuremark, along with Geekbench 4 CPU and Compute tests and Cinebench R15 for single and multi-core performances. The test results are quite impressive for such a small chip of this little caliber. It was surprising to see that the chip could score a multi-core performance of over 800 points. The FireStrike and TimeSpy scores are quite modest and we can’t expect anything more than that. We did try to overclock the APU using the Ryzen Master and did get higher scores, but that resulted in overheating the APU (it went up to 85C with a slight CPU/GPU clock speed jump). We used the same Wraith cooler that came with the package. Speaking of temperatures, we did see that the APU did go up to 70-75c on heavy load, and while being idle, the temperatures stay between 35-49c on average. I also used a wall meter to see the total power consumption of the whole system, and surprisingly, it didn’t go more than 110W, while gaming or heavy CPU loads. 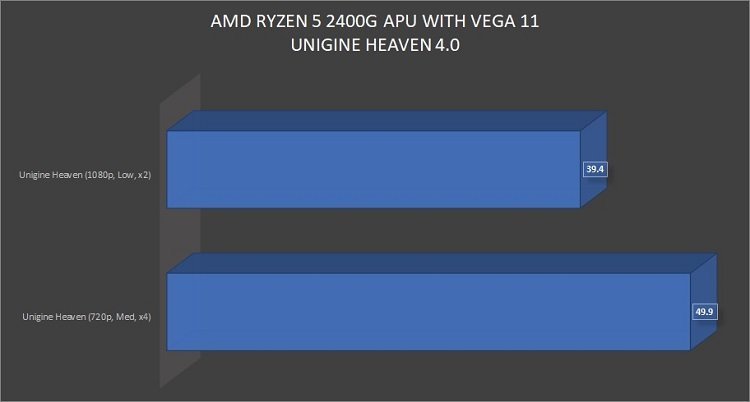 Speaking of gaming, we decided to focus only on what the integrated Vega GPU can do, instead of using a graphics card with it. We tried a mix of games, including Rise of The Tomb Raider, The Division, Battlefield 1, Crysis 3, GTA 5, Tekken 7, and Diablo 3. We chose to test most of them on 720p resolutions and low-mid settings (Except for Diablo 3 at high settings). We did also try BF1 and the Unigine Heaven 4.0 benchmark at 1080p, low settings. Check out the scores below. 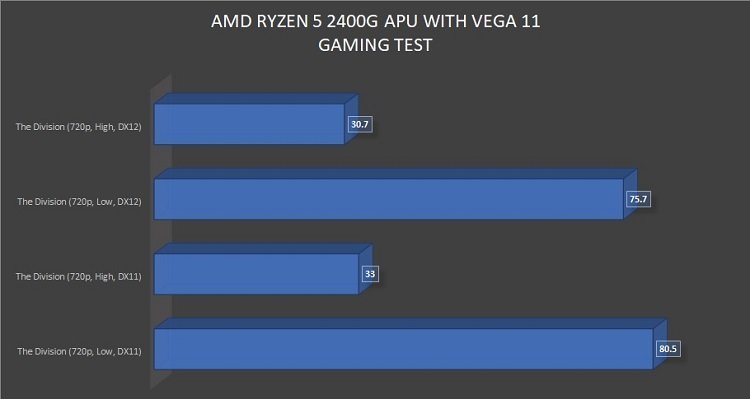 The numbers are quite impressive for what this small chip can do. At 720p, the AMD Ryzen 2400G is quite a champion for budget gaming, capable of scoring nearly 60fps on low settings. I wasn’t expecting the APU to perform Crysis 3 at 44 fps (720p, low). You could also play Tekken 7 at 59fps with 720p and enjoy beating up online players. There was one more thing that I was curious about the Ryzen 5 2400G and that’s the mining performance. Unfortunately, while using the NiceHash AMD miner benchmark, the system did restart always when the benchmark was half-way through and we tried it several times. The driver that we used here is the latest AMD drivers for Ryzen APUs. And before you shout out, I did try installing the beta mining drivers, but the installation wasn’t able to detect the APU as a Radeon product, at the time of testing. We also tried the Claymore Ethereum miner v10.6 and the process failed to create DAG files. We expected this because you would at least need 4GB of graphics memory as per today’s DAG file sizes and the APU is only set to 2GB shared memory. This could be rectified once the BIOS updates get released for higher UMA memory settings up to 8GB. I’m sure miners know about this. 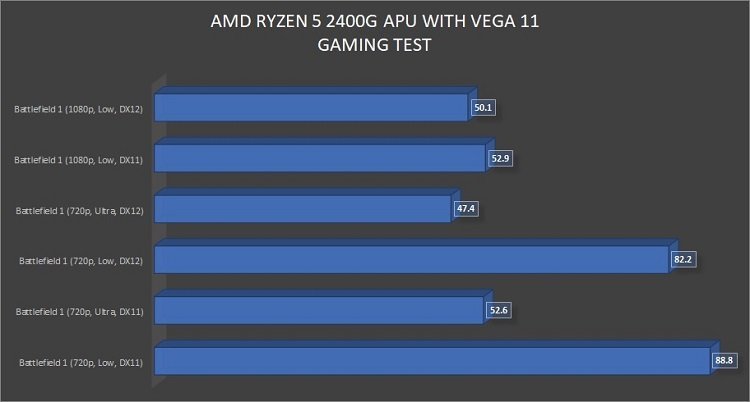 So, is the AMD Ryzen 5 2400G worth buying? Unless you don’t mind playing at very low settings and at 720p, this APU is quite the performer. It’s even good for those who only play e-sports games. Now, if AMD is listening to this, since you have released a low-cost gaming processor, how about releasing an APU that packs HBM2 and enough Vega compute cores, that can handle 1080p gaming at mid-high settings, 60fps? Now that’s a good gaming chip we all would love to see. We already do have those on the latest gaming consoles like the Sony PlayStation 4 Pro and the Microsoft Xbox One X. 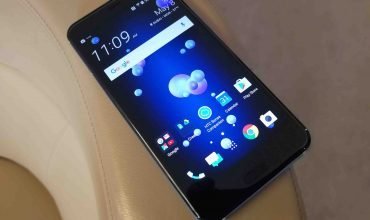 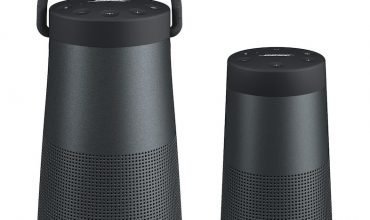 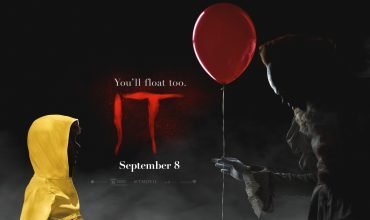