As Acer continues to be one of the preferred brands for laptop brands, their convertible PCs gets better by each and every iteration. We get to review the Acer Switch 5 SW512-52 convertible tablet PC for review and here are our thoughts about it.

As a cheaper alternative to the Microsoft Surface line-up, the Acer Switch doesn’t fail to impress us with its features and capabilities. The design has been improved from its previous iterations and as the dimensions go by, the width of the device is 292.9mm of thickness, which isn’t bad for a 2-in-1 tablet convertible and the weight of the device is just 920g (that’s a win for those who don’t want to carry around a heavy laptop on the go). But if u carry the dock keyboard, it gets a tad bit heavier at 1.27 kg. It’s impressive that the 12-inch IPS display comes with an impressive screen resolution of 2160 x 1440, or simply known as QHD. This means images and text will appear sharper and better with more vibrant colors. We must also mention that the viewing angles of the display are good, considering that it’s a Windows tablet.

While most of the tablets are now coming with less and less useful connectivity ports, the Acer Switch comes with one full-sized USB 3.0 port and one high-speed USB 3.1 Gen 1 port. Both offer high-speed data transfers and are placed on the right side of the tablet. We are glad that Acer decided to add one full-sized USB port so users will be able to add a peripheral such as a wireless mouse while leaving the other port open to transfer data from an external hard drive or USB flash. 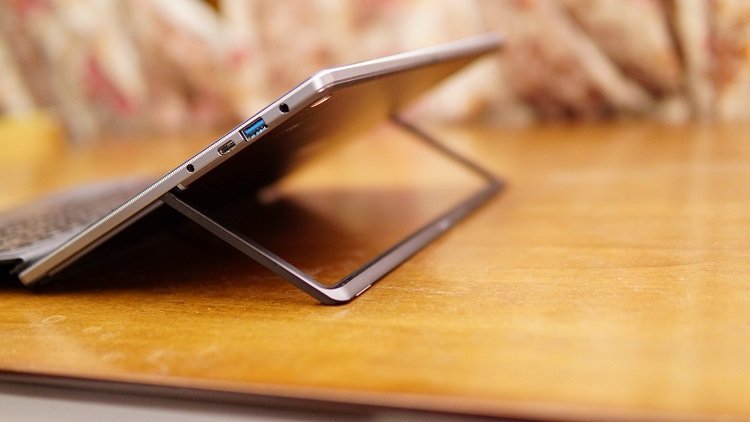 The built-in devices used for voice and video calls include a microphone, a pair of stereo speakers and one 2MP front camera. The camera on the rear features a 5MP image sensor. The speakers are smartly placed near the top edge of the display and the audio is loud enough. The main design feature of the Switch is, of course, the kickstand, which has its own auto-retracting the feature that lets users view at angles up to 165 degrees. The stand has a unique U-shaped design and the tablet itself offers a premium build with an easy-to-hold edge for better grip. There is also a “Switch 5” insignia seen on the auto-retracting kickstand.

Turning the Switch 5 to a laptop only requires you to snap the magnetic keyboard towards the bottom of the laptop. The keyboard doubles as a cover for the display while the tablet is not in use. The keyboard layout is similar to the Acer laptops that were released in the previous years. The key travel is fine with decent haptic feedback while typing documents or other editorial work.

You can also align the keyboard for a better ergonomic position that will help for a better typing experience. The keyboard palm rest is comfortable and the trackpad is smooth and wide enough for most mouse functions. Last but not least, the keyboard is backlit that allows users to see the keys in dark situations. You also get a smart stylus with the Acer Switch for those who want to create some impressive drawing work or use the screen as a notepad. The power button on the left side doubles as a fingerprint scanner. 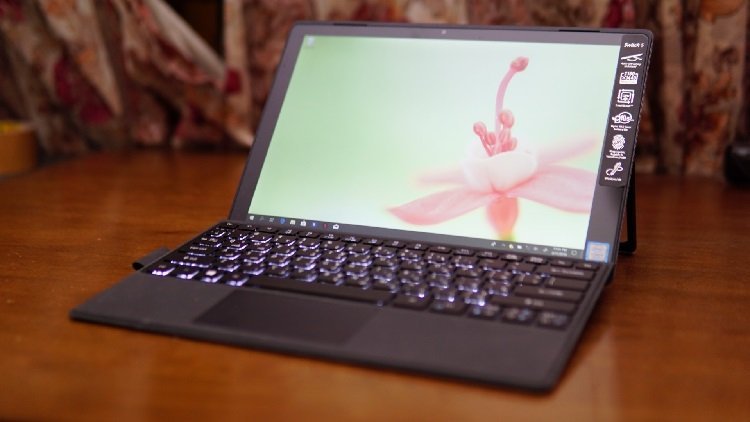 The Acer Switch 5 isn’t just about the looks but also features decent hardware to ensure smooth performance for most common PC workloads. The model that we reviewed came with the older Intel 7th generation i5-7200U processor that’s clocked at speeds of 2.5 GHz and maxes out at 2.71 GHz. The processor is a low-power processor, which means that the chip consumes less power while offering decent performance. It should be noted that unlike the latest quad-core low power processors, the 7th generation i5-7200U features a dual-core configuration. Acer has also included a built-in a liquid cooling feature called the Liquid Loop to keep the CPU cool at most times. This is an impressive feat for a tablet since liquid cooling methods are generally used on gaming desktops that feature powerful processors and graphics cards.

That said, the performance is still good enough since the tablet also comes with 8GB DDR3 RAM that’s sufficient for most workloads and for a speedy performance with instant openings of most applications, the tablet also comes with a 256GB SSD onboard with Windows 10 Home edition installed. For expandable storage, you can also make use of the inbuilt MicroSD card slot, although, you won’t be getting the same file copy speeds as with the SSD.

The MicroSD card slot supports MicroSD and MicroSDXC cards. With our usage for web browsing, unzipping files, typing documents, editing excel sheet and other office-based work, the tablet was more than sufficient to handle them without slowdowns. Other features of the tablet include Bluetooth 4.0 and 802. 11ac WiFi standard. 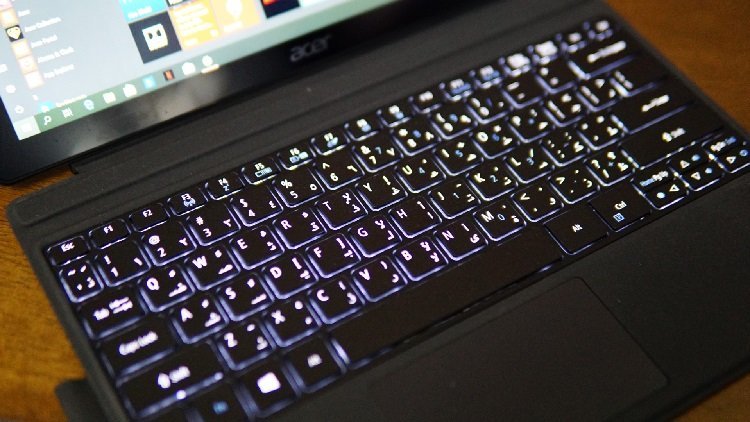 The internal battery capacity of the Acer Switch is rated to be 4870 mAh and it consists of a 2-cell Lithium Polymer (Li-Polymer) battery chemistry. As with our mixed usage, the tablet was able to go on for over 6 hours or so since we were playing HD videos from YouTube and the usual editorial work as always. Keep in mind that the screen resolution also eats up quite a bit of juice so it’s no surprise that the tablet can’t go on for the whole day.

For those looking for an affordable 2-in-1 convertible as an alternative to the Microsoft Surface devices, the Acer Switch 5 SW512-52 is a good choice to consider. Since Windows laptops and convertibles with 8th generation Intel processors are slightly more expensive, the dual-core 7th generation low-power Intel processors still kick in some good performance. You wouldn’t even need to worry about multitasking because 8GB is sufficient enough for most home-based work and the SSD is an added bonus for quick boot-up for Windows and applications. The 12-inch IPS display with its QHD resolution offers great image sharpness with good viewing angles. The kickstand also helps for different viewing positions making the device to be used as a tabletop tablet, a laptop and more.

The inclusion of a full-sized USB 3.0 port and a faster USB 3.1 port ensures more connectivity options. The backlit keyboard is good to use with comfortable ergonomic positions for typing and the included stylus is an added bonus. The fingerprint scanner helps to log-in the tablet along with Windows Hello facial recognition and the Liquid Loop feature keeps the tablet cool and quiet at all times.